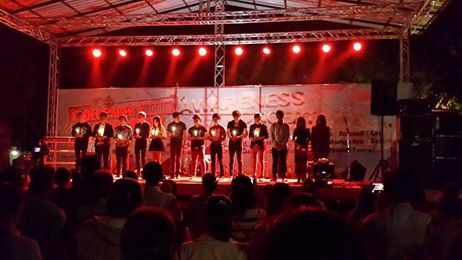 On World AIDS Day the team hosted an awareness concert in a local park where 600 people gathered throughout the night. Two TV channels were also present filming parts of the concert, which was broadcast on National TV. Myanmar co-workers were interviewed giving the team an opportunity to share the reason for organising the concert; to see both the stigma and fear of HIV be removed. The team hope that the concert was a stepping stone for this to happen.

Many people who attended have already shared how great the night was. One of the highlights being a drama that was performed demonstrating the different reactions people have to hearing someone is HIV positive. It got one of the biggest applauses of the night.

As the concert was being set-up, a man approached a local worker and enquired why the concert had been organised. She explained that it was to raise awareness of HIV and AIDS and to help people to have a greater understanding.

She continued to talk to him and he expressed how great it would be if someone who was HIV positive shared their story. During their conversation he disclosed that he was living with HIV.

The AIDSLink worker felt privileged that this man felt comfortable enough to share this information to a stranger. It became clear that because he saw compassion in her and felt he could trust her, he was able to share such personal information.

Many people said that this concert was the first of its kind having a theme that focusses on educating people and raising awareness about HIV and AIDS.

The team cannot fully comprehend the scale of impact that such an event had, but they trust that those who attended or watched on TV learnt something more about HIV and AIDS.