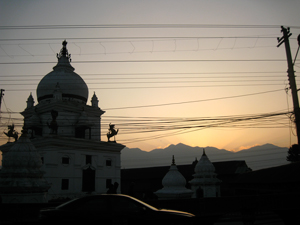 Since the first case of HIV was diagnosed in 1988, the prevalence in Nepal has risen to 0.30 per cent with over 50,000 individuals living with HIV. Over 15,000 children have been orphaned by HIV & AIDS in the country, yet no national action plan has been proposed to address this group. While there is still an urgent need to scale up interventions both in prevention and care, gender inequality, low levels of education, lack of awareness literature in Nepali, and an aura of stigma and discrimination make the task difficult.

Raju’s mother is not able to work because of the medication she is on, but his grandmother sells fire-cooked corn on the streets. On a good day, she will earn 150 rupees, about 1.5 USD. The rent of their room is 2000 rupees. It is a very small place to live with three people.

Thanks to AIDSLink Nepal’s sponsorship programme, Raju able to attend school. With an education, he has a better chance of breaking the cycle of poverty.