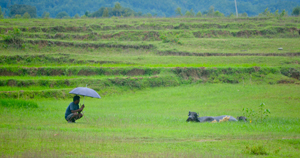 Sam* sat on the hard plastic chair and looked down at his hands. After serving 17 years in the Indian army they were tough and calloused, now they shook slightly with old age. He coughed, but the face-mask he had been given upon entering the hospital protected others around him.

Finally it was his turn and he walked into the tiny office where the doctor waited. The news came with little softness. “You tested positively for both HIV and TB.” And just like that, Sam’s world changed.

He had been sick for some time, and his daughter brought him to a hospital near where they lived, in a village in Nepal. But the doctors could not diagnose him and referred him to a larger hospital in the capital, Kathmandu. Sam packed a few belongings and travelled with his wife and daughter by bus for 12 hours. They only had enough money for a few days, and would then need to figure out what to do.

“We need to admit you to the hospital now,” the doctor said. “So we can start treating you for TB.”

In the next 12 days, Sam’s appetite increased and some of the energy he had been lacking for weeks began to return. During his stay in the hospital, several doctors and nurses mentioned the Asha Diep (Light and Hope) Care Centre, run by AIDSLink Nepal (ALN), where Sam and his family could stay while he continued his antiretroviral treatment (ART).

During the two weeks that Sam and his family stayed at the Care Centre, ALN staff transported him to the hospital for check-ups, arranged for him to receive free ART, and spent time getting to know the family. One of the staff members had the opportunity to share his own story with Sam, and for possibly the first time Sam heard about true peace and hope.

“His face has a new healthy glow,” Kamal, an ALN staff member, shared. “Sam learned that he needs to make good decisions and be responsible for taking care of himself.”