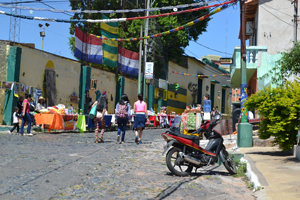 Paraguay, a small landlocked country in the middle of Latin America has what is considered a low HIV prevalence rate of 0.4%, however, it has a high rate of stigma against people living with HIV, and gender based violence, which increases a woman’s risk of infection, is an everyday occurrence for many.

Throw Ciudad del Este (CdE) into the mix. CdE, is in what is known as the Tri Border area, where Paraguay meets Brazil and Argentina.  It is a hub for the sex-trafficking industry.

Most of those who end up being trafficked have come to Ciudad del Este because they are poor, vulnerable and they believed the promises of traffickers who offered them work in hotels or restaurants. Most (90%) are female and between the ages of 10-20.

Being in sex-work increases a woman’s chance of being infected with HIV by 12 times, and being young and trafficked increases her vulnerability to HIV further still.

Eighteen years ago David and Judy’s domestic worker, Alice, started to get sick and just couldn’t seem to get better. They took her to the hospital where it was confirmed that she was HIV positive and in the AIDS stage. Back in those days treatment was harder to get and not so effective as it is today. Judy spent many hours by Alice’s bedside, nursing and feeding her until she passed away.

The things that they learnt and experienced in those days led them to begin a ministry to people living with HIV in memory of Alice. In 2003 they started Alto Refugio which is now a well respected drop-in-centre for HIV patients in the capital city of Asuncion.

Alto Refugio meets the needs that hospitals can’t meet - the social, spiritual and physical care and support of patients. Counselling, hospital visits, discipleship, a nutritious meal for patients who visit the hospital or have relatives in there, day care for children whose parents are keeping hospital appointments, educational talks, and many more intangible things that make it a safe place for people who are marginalised.

A couple of years ago David and Judy sensed that God was telling them it was time to move on from Alto Refugio. They began to pray about what they should do next.

Through a series of events, and open invitations from the medical fraternity, God laid Ciudad del Este on their hearts and at the same time brought them together with AIDSLink.

They plan to move to CdE early 2016 and begin by working in conjunction with the local hospital’s HIV department in providing social and spiritual care for HIV patients. Within the first couple of years they hope to open a drop-in-centre for people living with HIV and then a care centre for those who need a safe place to stay.

They do not know exactly how God will lead them in this new ministry, although sex-work, trafficking and domestic violence were common amongst those they ministered to in Asuncion they are much more prevalent in CdE and responding to them will be a new challenge. However, they know that God is the one in control and He will guide them. Over the next year they are praying that God would lead them to the right property in which to establish a drop in centre, and a team to work with.

We sense that this is the time for CdE and HIV ministry in Paraguay and the door is so wide open that it is off the hinges!